There were 4 professors of Psychology, waiting for a train to come. Just then the train arrived and all the 4 professors rushed inside, only to realize that the train will depart after an hour. While wait at the railway platform, sipping the cup of tea, they started a discussion and did not realize the time.

And the train, left the station. The fourth professor was left high and dry and the train departed. He started crying vehemently, ?I missed my train, I missed my train.? One passerby asked him why he was crying so loud and reassured him that after 20 minutes, one more train would come and go to the same destination where he had to go. And this professor said, ?It was me who had to travel in that train, the three professors who had caught the train had actually come to see me off.?

Jalebi, Honey & Darling
Santa was invited to Banta--s home for dinner, where he noticed that his buddy preceded every request to his wife with endearing terms, calling her --Jalebi--, --Honey--, --Pyaari--, --Darling--, --Sweetheart-- etc.
He was impressed, since the couple had been married almost 40 years.
While the wife was in the kitchen, Santa said, I think it--s wonderful that after all these years, you still call bhabhiji those pet names.
Banta hung his head, To tell you the truth, I forgot her name about 10 years ago.
· 2 Like · May 01, 2015 at 19:05
Category: santa-banta
Sms / Marital Woes

Finally, here is some warning given out in good faith! 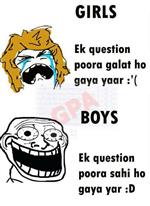 Girls Vs Boys ater the examination
Posted by shabana gul
Posted on : Aug 20, 2018